Juliet started out as a dancer, moved to New York and joined the Rockettes, and then landed her first Broadway role. Since then, she’s been in multiple Broadway shows and touring companies, along with a PBS version of Crazy For You. She took a break from performing to start a family, but after 12 years raising her kids, she’s back at it, doing lead roles throughout Southern California. Sometimes I have the pleasure of hearing her working on vocals with our amazing teacher Ben and am always impressed with her huge voice and personality she brings to a piece of music. 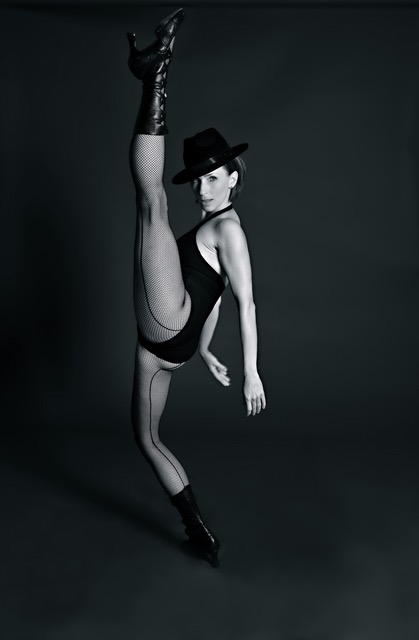 Q & A with Juliet

MM: How did you get started with music (and musical theatre in particular), and how long have you been at it?

JS: I started in musical theater when I was 16. I was a ballerina up till then, but I was always a little ‘heavy’ in the ballet world’s eyes, so I switched to musical theater.

MM: The absurdity of the “heavy” description is easily revealed in that photo of you! In any case, what kind of prep work as a kid did you do before pursuing it more seriously? Voice classes, dance, etc.

JS: I didn’t start voice lessons until I was 22. Up until then, I relied on my dancing to get me jobs. But after taking lessons, I found that I actually had a decent voice.

MM: What was it like being in the Rockettes?

JS: The Rockettes was a good job to have in NY, but in truth, it was never my dream job. I really wanted to be on Broadway. So I just used it as a stepping stone. But working at Radio City was pretty awesome. The theater holds 6,000 people, and there is nothing like hearing 6,000 people applaud you. It was very grueling at times. We did up to 6 shows a day! But having a job in NY during the Christmas season was a big relief. As a performer, it’s was hard to have a steady income.

MM: What was the Broadway audition circuit like? Did you have an agent? Do the open calls?

JS: The Broadway community is like no other. You really start to feel like a big family. I did not have an agent, but after the first year or so, the casting agents got to know who they liked. So they would call me in to private calls so I didn’t have to do too many open ones. When I did go to an open call, I always went to the “Dancers who Sing” call. So they would pile us all in a room and do a dance cut first. So that sort of took the pressure off. I was never terribly confident in my voice, so I felt better if they could see me dance first. Then they would sing you after all the cuts. I have a pretty decent ‘belt,’ so that, combined with my dancing, would get me a fair amount of jobs.

MM: Do you, or did you ever get performance anxiety?

JS: I get anxiety when I’m doing a lead role. In the beginning I was doing mostly ensemble work. I always knew if I messed up I could cover it and no one would know. But now I do lead roles usually, and people will definitely notice if I mess up!

MM: Tell us more about Broadway!! What was that life like? What was your favorite show that you did? Do you miss it?

JS: Broadway was amazing! I loved every minute. I did 2 Broadway shows and 2 Broadway tours. My favorite was Chicago. I love that every person has a character in that show. I’ve done 5 different versions of Chicago now and almost every role in it. I do miss performing in big houses, but I still perform in local theater and that is a lot of fun for me.

MM: Who are some artists who have inspired you, and why?

JS: I love Fosse. His dancing style is just so different. And of course I’m drawn to performers who are triple threats. I know first had how hard it is to dance AND sing at the same time. Sutton Foster is amazing. And look up videos of Debbie Allen performing back in the day. She was ridiculous.

MM: What’s your all-time favorite show? Do you have a dream role you haven’t gotten to play yet?

JS: As I said, I loved doing Chicago. Another favorite would be Crazy for You. I was in the PBS version of that, and I had a great time filming it. I also loved the Production I did of A Christmas Carol. It was at Madison Square Garden and Susan Stroman was the choreographer. It was a really beautiful version of the show. I’m Dying to play Fastrada in Pippin. I don’t think they’re releasing the rights to that show right now, so here’s hoping I’m still in dancing shape when they do!

MM: What makes you keep up your practice, and what are your new goals?

JS: I got inspired last year to get back in the business after raising my kids for 12 years. I really want to work on my voice so that I could feel just as confident going to a singers call as I would a dancer call.

JS: Choose music that inspires you. I used to pick songs I thought the producers wanted to hear. But what they really want is to be entertained. And if you don’t love the song, it shows. No matter how good a singer you are, if you’re not invested in the piece, it will show to the audience.

MM: Can you share about a technique, skill, or song you struggled with, and how you are overcoming it or have overcome it?

JS: I’m still working on my belt. I realized that I had been singing incorrectly my whole life. I thought you had to “push” to get a belt sound out. Now I’m using what I call the ‘up and over’ technique. Singing for me is as much visual as anything else. If I can picture where the sound should be coming from, it helps me place it correctly.

MM: What’s something most people don’t know about you?

JS: I hate to tap dance and yet, that is how I got most of my work! (Moral here is, study everything, even the stuff you don’t like!)

MM: What are some of your favorite hobbies outside of music? Favorite books, movies, shows, sports?

MM: Do your kids share your love of musical theatre? What are your musical goals for them?

JS: My oldest son is a ballroom dancer at Orange County School of the Arts. My younger son plays the piano and is auditioning for OCSA this year in the musical theater dept. I just want them to have a love of the arts. I don’t care if either of them actually go into it. In fact, I might breathe a sigh of relief if they don’t. Its a hard life, being an artist. But oh so rewarding too. I wouldn’t change any of it.

MM: Anything else you want to add?

JS: To any future performers out there: Be authentic to yourself. There is only one you and only you can tell your story. Just create…don’t worry about “will I get famous, or will they like me”. Just tell your story, what ever that is, in what ever format you can. Write a song, paint a picture, choreograph a dance….Just do the work.  The rest will come.